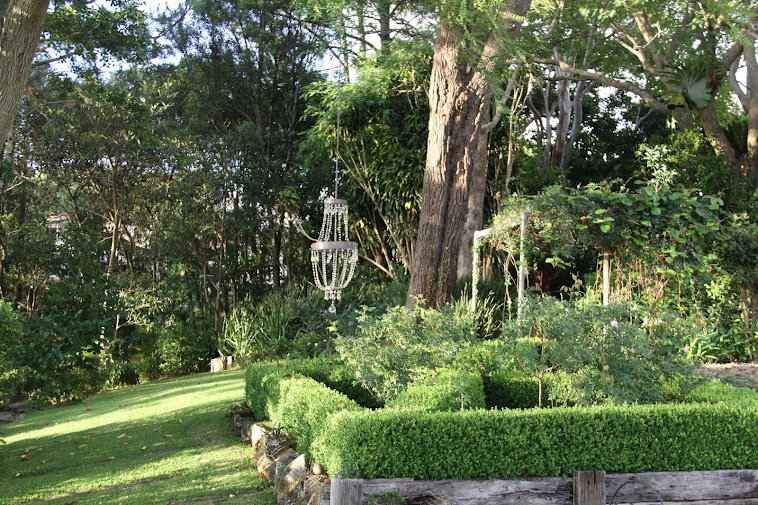 Three months have passed, in such a rush – the arrival of Monty, grandson number three - a bonny little boy who looks just like his father – dimples from his beautiful mother…..While babies were arriving our No 2 daughter flew in from Dubai with her husband and two little boys – both families together – five children under three and a half …….there was little time for the garden – or An Arty Gardeners Scrapbook….but such fun with all the little people and their lovely parents….how very lucky we feel….

The end of June was also the end of our rainfall – we have just bought 1200lts of horrid water – it’s so full of chlorine that one cannot drink it …..I have to eek it out and put it on only the most special plants…..the newly planted camellias and magnolias – also I have been collecting the shower water in a bucket – what one does to keep precious plants!!

I should explain that we are reliant on the rain that is collected from our roof – we have an underground tank that holds about 13,000 gallons of water – don’t know what that is in litres – we usually have enough water to get through the year – except when we are putting in lots of plants – and it refuses to rain!! The soil here is acidic and red with some clay – but also has wonderful drainage – sadly we do not have any ground water - we did have a water driller here years ago but he did not find any underground water.

The cherry trees, camellias, wisteria and magnolias have all come and gone – I forgot, the bulbs – mostly snowflakes and freesias – with a few fabulous blue babiana . Now the clivia and hippeastrum are in flower – the poor roses are struggling due to lack of water – but as soon as it rains they will feel so much happier…the one rose that has not realized its dry is R. Fortunana - I guess I should also mention the Montville and Mutabilis roses – they are really tough!!

Much more than three months have passed now - we have had seven months without rain - and have stopped watering all plants other than the pots that I water from the shower...Poor garden..... we will loose some of the Camelias and Magnolias planted only a few months ago......gardening without water is so frustrating - I fear I have sulked for the last few months and stayed away from the garden!!!!

Mirror mosaic placed around the garden 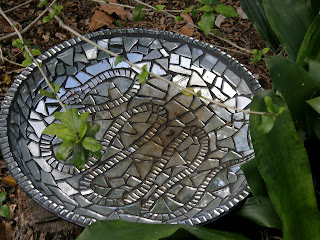 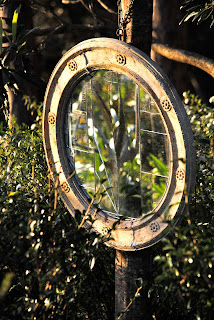 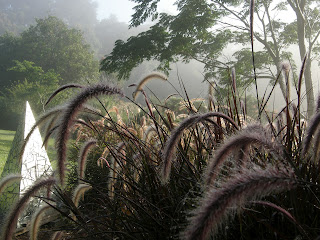 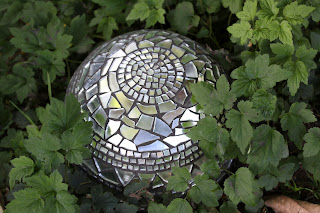 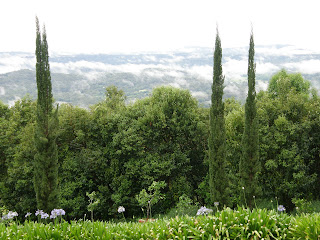 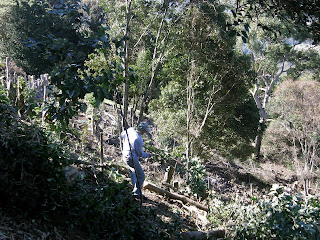 Another day at The Shute and am so delghted with the amazing result - after 9 years all the privet on the 3 acres has been removed......such a huge job - but its gone...The land is so steep where we have been working - rather tricky.... 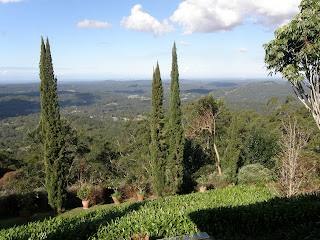 Now we can enjoy the hinterland.  The next job is to plant camellias, magnolias and some Cassia Rainbow showers and one jacaranda.  This photograph is taken from our front verandah - looking towards the coast.

Mirror Mosiac placed around  The Shute - every now and again I get fired up and make something - the latest is a crescent moon - which will swing from a very large eucalypt in the bottom of the garden.
Posted by Sue Neale at 02:49 No comments:

This morning was Garden Club, we meet in a Club Members garden, or somewhere on the Sunshine Coast or Hinterland. We have coffee - always a chat, as it consists of  a great and diversified group of women - we wander around and look at plants etc etc.... Today we had a speaker - an interesting topic,  propagation.  Such a rewarding part of gardening - here at 'The Shute' we have propagated many box (buxus) for hedges and lots of Duchess de Brabant - or as we call it on the Blackall Range, the Montville Rose -a soft pink, as it grows well in our wet summers.  I have cut back on the variety of roses as only a few can cope with our climate.  Monsieur Tillier is a favourite, as is Lamarque  - a lovely creamy-white wild climber.  Mutabilis - a china rose with a single yellow/golden bloom that turns pink then red - a wonderful show if mass planted. I am fired up to do more propagating - as we still have many spaces to fill.... 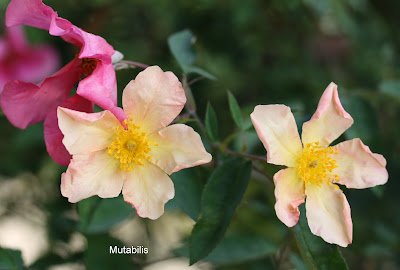 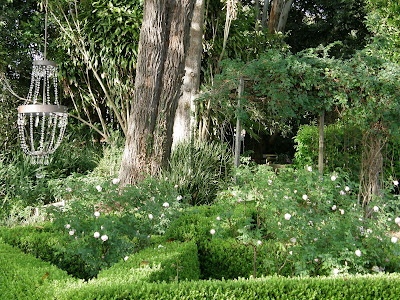 This is the missing Blog.....
it just arrived back from where ever it disappeared to....but as my favourite roses are here I thought I should include it.
Posted by Sue Neale at 06:09 1 comment: 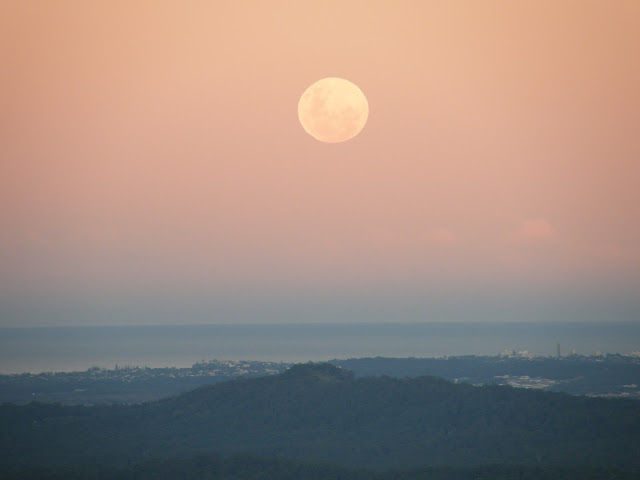 The June full moon from our front verandah - looking over the  Sunshine Coast. 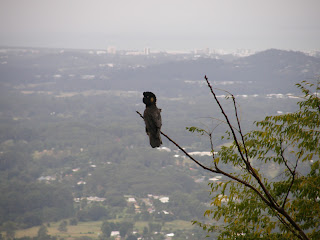 A young Black Cockatoo sitting on a white cedar tree - the parents bring their young to our garden each year - we feel privileged to have them visit  - they drink from our ponds and eat the pine cones.﻿ 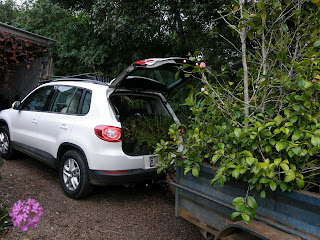 A future concern is that many of the local Nursery's are closing down - what to do, and where to buy in the future... even so we had a wonderful time this week buying many plants at half price  - large camellias, hydrangeas, grasses etc.
These are to go in front of the house where we are now clearing the privet - it will be so good to have camellias that are bigger than 10cm tall.....instant gratification - have not got enough gardening years to plant too small plants!!! 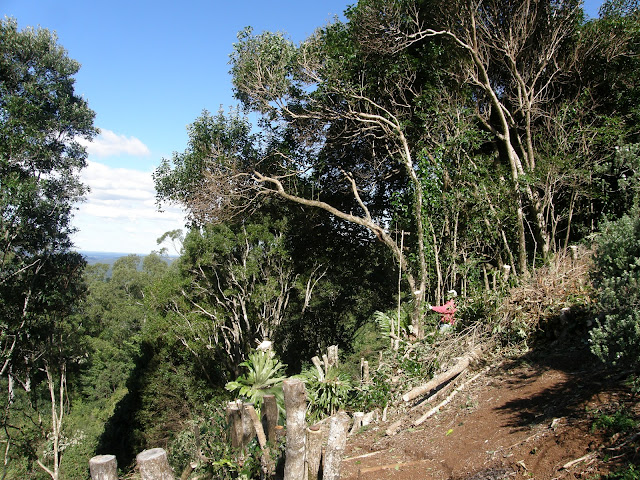 The constant challenge is to turn this mess into an interesting garden.....I cannot wait to get it under way.....  the fun thing about a Blog is that it will be such a good record - pity I did not begin it years ago - the clearing and planting has been on going for 9 years.....we are now on the last of the clearing .....so exciting !!!!     The person in the red shirt is my  husband and chief garden helper....none of the garden would happen without him.
Posted by Sue Neale at 05:37 No comments:


My last Blog has dissapeared off into that place I cannot find...that was about a month ago - so now I am over being cross and will start again....


We have been clearing more land - its the last of the pirvet - which originally covered the entire 3 acres of the  property.  This is the steepest scarey part.....down in front of the house - we have several more days of clearing  to go - but it will have to wait until my lovely husband returns from work.....he is lucky to have survived last week as I rolled an old tyre down the escarpment which hit him in the legs - thanks to my screaming he did not go over the cliff!! The next day I came home to make lunch - he was to follow.....after an hour I decided he was in trouble and went to look....having climbed back down the very steep rock face - there he was waiting peacefully on a large rock - unable to scramble back up - now  I have watched  Rescue on television so knew exactly what to do... .rushed back up the  what felt like a huge mountain to find a rope and new gloves..... .what a chuckle.......but at least he was safe!!!


The weather report also said that rain was forecast......as usual we believed them......therefore thought we should burn some of the heaps of cut up privet....after two days and three large fires we have cleared quite a large area.  We are delighted with the result - but in reality it still looks as if a bomb has gone off!! 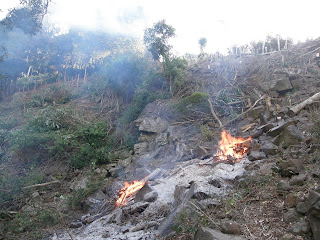 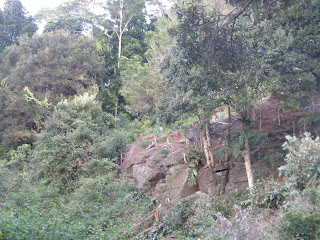 Lots of imagination is required - but one day this will be a lovely area........tree ferns, plams, birds nests and ferns etc etc

It has taken some time to make this entry - for the first three months of this year we have had 60 inches of rain.......during one of those very heavy drenching the ceiling in our kitchen leaked......underneath on the kitchen table was my laptop and mobile.......both drowned..... it has taken the insurance company from the 24th February until now to acknowledge the claim - still no money!!!!
So fed up with them went out and bought a new laptop so I can chat again.....

Easter has come and gone with a rush - we had one of our lovely daughters her husband and two little girls here - which was lots of fun. . So keen to teach them about living in the country - running freely in the garden - with dogs in toe, watching the birds, catching caterpillars ..... Cooking over an open fire - food always tastes so much better!!

We have been planting lots of plants - last weekend bought about a dozen climbing roses - can't wait for them to grow into the trees and over the timber.  Today is the first sign of Autumn - chilly with wind....the leaves on the tropical birch are turning as I watch them through the window.
The plan is to keep planting ground covers so that we can stop mulching - as its caused a huge weed problem and costs a fortune - and in several months time its all disappeared.... A lovely gardening friend called in the other day with her car full of plants - she was concerned that we had so much to do and needed so many plants - it seems to have been an on going programme for the last 8 years.....
Chatting about the work - I had best get out there and do something...